My roommates can attest to how downright dorky that I get it when I’m super excited about something that I’ve come up with in the kitchen. I’ve been around the block a time or two when it comes to squash..[ HA who even says that?] …. but I’ve never had the pleasure of meeting one of these guys.

This ^^^ is a spaghetti squash. I bought it thanks to a few requests from my lovely Facebook Fans!

While I’ve heard of using spaghetti squash as just that- a type of spaghetti replacement- I had my mind going elsewhere. Here’s what happened:

This recipe made about 6 small spaghetti squash pancakes. Use both halves of the squash and double the rest of the ingredients if desired!

Spaghetti squashes (squash? is squashes a word when referring to the veggie in its plural form?!) are prettttty hard to cut in half when they are raw. Well, my mom told me this. She knows everything about everything in the kitchen- so I took her advice on this one and baked the squash, whole in a dish, in the oven for about 30-40 minutes at 375 degrees. Make some slits all around the squash so it has the ability to steam.

Pull it out of the oven, and allow it to cool for a little while before handling. Cut it in half, and remove the seeds and “stringy” part on the inside- kind of like a pumpkin or a cantaloupe.

At this point- grab a fork and start scraping! It literally just falls apart into these thin little noodles. Hence the whole spaghetti squash name, I would assume. I was so excited about this.

Keep scraping until you get about 1.5 cups out of one of the halves. I took a paper towel and squeezed out some of the excess moisture within the squash.

In a bowl- combine the squash, onions, flour, eggs whites, and spices. Pour in small 1/4 cup batches onto a greased skillet. I did a few batches of these and here is the best advice I can offer: Heat the skillet only to about medium-low. Think low and slow. I let these little guys sizzle for about six minutes per side That’s twelve minutes total. This forms a firm center and a crispy outside. Yum!

These are a GREAT alternative to your everyday potato. I really want to try them out as the star of a savory brunch menu. 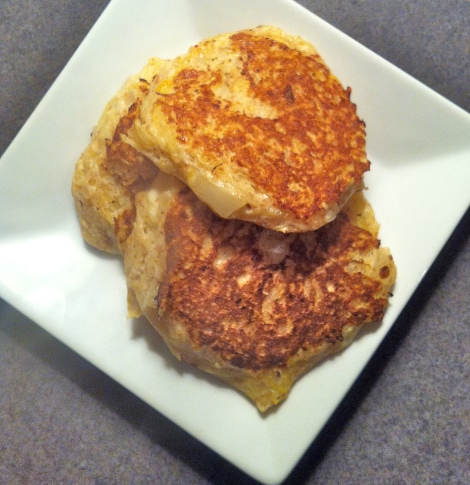 Of course I had to try out a few different toppings for these — while the ever so classy ketchup was delicious, my favorite was most certainly mixing two tablespoons of non-fat greek yogurt with a hit of Sriracha sauce. The possibilities are endless

Try these out and let me know what you think! 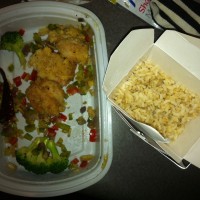